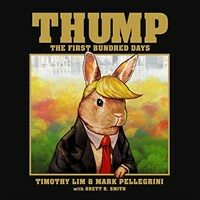 Join Thump?an unassuming, unconventional, and utterly unstoppable bunny?as he campaigns his way across the USA, overcoming the competition and hopping straight into the White House!

A candidate stormed the stage: A bunny named Thump!

His goal is nothing less than to become President

And to make America great for each resident!

But his campaign trail is fraught with challenge and peril,

Attacked on all sides by fiends ferocious and feral!

There are traitors and crooks and old establishment guard

And rabid media watchdogs unchained from their yard!

Will the winningest of bunnies take his greatest stand

And find his way to the highest office in the land?

We won’t spoil it for you here, but you might have a guess…

Come join Thump and his party on the road to success!