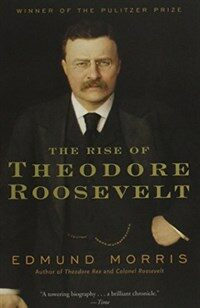 The Rise of Theodore Roosevelt (Paperback)

A new edition of the Pulitzer Prize and American Book Award-winning biography focuses on Theodore Roosevelt's pre-presidential career, covering the period between 1858 to 1901, during which time Roosevelt built himself up from a frail asthmatic youth to a robust man with varied interests. Reprint. 20,000 first printing.

WINNER OF THE PULITZER PRIZE AND THE NATIONAL BOOK AWARD &; Selected by the Modern Library as one of the 100 best nonfiction books of all time

This classic biography&#160;is the story of seven men&;a naturalist, a writer, a lover, a hunter, a ranchman, a soldier, and a politician&;who merged at age forty-two to become the youngest President in history.

The Rise of Theodore Roosevelt begins at the apex of his international prestige. That was on New Year&;s Day, 1907, when TR, who had just won the Nobel Peace Prize, threw open the doors of the White House to the American people and shook 8,150 hands. One visitor remarked afterward, &;You go to the White House, you shake hands with Roosevelt and hear him talk&;and then you go home to wring the personality out of your clothes.&;

The rest of this book tells the story of TR&;s irresistible rise to power. During the years 1858&;1901, Theodore Roosevelt transformed himself from a frail, asthmatic boy into a full-blooded man. Fresh out of Harvard, he simultaneously published a distinguished work of naval history and became the fist-swinging leader of a Republican insurgency in the New York State Assembly. He chased thieves across the Badlands of North Dakota with a copy of Anna Karenina in one hand and a Winchester rifle in the other. Married to his childhood sweetheart in 1886, he became the country squire of Sagamore Hill on Long Island, a flamboyant civil service reformer in Washington, D.C., and a night-stalking police commissioner in New York City. As assistant secretary of the navy, he almost single-handedly brought about the Spanish-American War. After leading &;Roosevelt&;s Rough Riders&; in the famous charge up San Juan Hill, Cuba, he returned home a military hero, and was rewarded with the governorship of New York. In what he called his &;spare hours&; he fathered six children and wrote fourteen books. By 1901, the man Senator Mark Hanna called &;that damned cowboy&; was vice president. Seven months later, an assassin&;s bullet gave TR the national leadership he had always craved.

His is a story so prodigal in its variety, so surprising in its turns of fate, that previous biographers have treated it as a series of haphazard episodes. This book, the only full study of TR&;s pre-presidential years, shows that he was an inevitable chief executive. &;It was as if he were subconsciously aware that he was a man of many selves,&; the author writes, &;and set about developing each one in turn, knowing that one day he would be President of all the people.&;

Focuses on Roosevelt's pre-presidential career, covering the period between 1858 to 1901, during which time Roosevelt built himself up from a frail asthmatic youth to a robust man with varied interest.