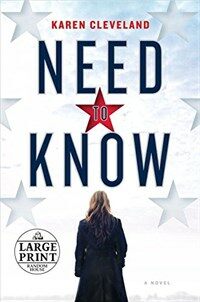 “Prediction: If you read chapter one, you’ll read chapter two. If you read chapter two, you’ll miss dinner, stay up far too late, and feel tired at work tomorrow. This is that kind of book. Superb.”?Lee Child In pursuit of a Russian sleeper cell on American soil, a CIA analyst uncovers a dangerous secret that will test her loyalty to the agency?and to her family. What do you do when everything you trust might be a lie? Vivian Miller is a dedicated CIA counterintelligence analyst assigned to uncover the leaders of Russian sleeper cells in the United States.?On track for a much-needed promotion, she’s developed a system for identifying Russian agents, seemingly normal people living in plain sight. After accessing the computer of a potential Russian operative, Vivian stumbles on a secret dossier of deep-cover agents within America’s borders. A few clicks later, everything that matters to her?her job, her husband, even her four children?are threatened.? Vivian has vowed to defend her country against all enemies, foreign and domestic. But now she’s facing impossible choices. Torn between loyalty and betrayal, allegiance and treason, love and suspicion, who can she trust?Film rights sold to Universal Pictures for Charlize Theron ??Rights sold in more than 20 marketsAdvance praise for Need to Know“Need to Know carves out a uniquely compelling space among thrillers: high-stakes international intrigue combined with high-drama domestic suspense. These richly overlapping layers of tension create a fast-paced, relentlessly gripping read.”?Chris Pavone, New York Times bestselling author of The Expats“I raced through this gripping tale of domesticity and deceit. Karen Cleveland deliciously ratchets up the tension at every turn. You won’t be able to put it down until the final, stunning page!”?Shari Lapena, New York Times?bestselling author of The Couple Next Door “Hold on tight! What a story, brilliantly told. An espionage thriller from deep within the heart of the CIA, told from a woman’s point of view. More modern than tomorrow. Absolutely gripping.”?Terry Hayes, New York Times bestselling author of I Am a Pilgrim