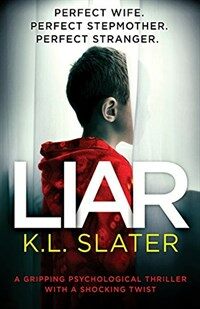 How far would you go to protect your family?

Single dad Ben is doing his best to raise his children, with the help of his devoted mother Judi. And then Ben meets Amber. Everyone thinks this is a perfect match for Ben but Judi isn't so sure...

There's just something about Amber that doesn't add up. Ben can't see why his mother dislikes his new girlfriend. And Amber doesn't want Judi anywhere near her new family. Amber just wants Ben and the children.

The further Judi delves into Amber's personal life, the closer she gets to shocking secrets that could change everything. And Judi must make a decision that could lead to the most disastrous consequences.

Liar is a compelling psychological thriller with a breathtaking twist that will keep you awake until the early hours. Perfect for fans of Behind Closed Doors, The Girl Before and The Sister.

What people are saying about Liar

'There is no way the explosive ending will not completely shock and surprise you ... This story will have you in its claws from the very first page and won't let you go until the very end ' It's All About Books 5*

'Oh my God. This was my first book by Slater and I could not put it down It was dark and twisted and fascinating.' The Reading Mommy

'From the moment I picked up Liar, I was sold. This story grips you from the start and I found it impossible to rest until I uncovered the mystery that was Amber.' Beckie Bookworm

'With plenty of twists and turns to keep me captivated this became a book that I just didn't want to put down until it was over.' Carrie's Book Reviews

'This is a fantastic well-written psychological thriller. There are twists and turns that leave the reader breathless and unable to put the book down.' Strong Book Reviews

'A psychological thriller that exceeds expectations. Your brain doesn't know who to root for, the back and forth kept me in suspense even as the story played out to the bitter end.' Family Reads First

'Very, very hard to put down... destined to be a hit.' Book Reviews by Monnie 5*

'Liar is one very twisted story... No way did I ever envision the ending to this book.' By The Letter Book Reviews

'I was totally gripped... you will not be disappointed.' Goodreads 5*

'Wow this starts at a breakneck pace and doesn't let up... A brilliant psychological read.' Goodreads