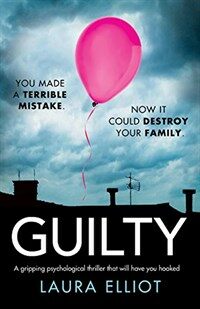 Guilty: A Gripping Psychological Thriller That Will Have You Hooked (Paperback)

It begins with a phone call. It ends with a missing child.

A few days later, Constance’s uncle,?Karl Lawson, suddenly finds himself swept up in a media frenzy created by journalist?Amanda Bowe?implying that he is the prime suspect.?

Karl’s life is in ruins. His marriage is over, his family destroyed. But the woman who took everything away from him is thriving. With a successful career, husband and a gorgeous baby boy, Amanda’s world is complete. Until the day she receives a phone call and in a heartbeat, she is plunged into every mother’s worst nightmare.?

An utterly compelling psychological thriller that will keep you guessing to the very last page. Perfect for fans of?The Girl on the Train,?Gone Girl?and Sarah A. Denzil’s?Silent Child.

Read what everyone is saying about Laura Elliot:?

‘A?tense read that had me at times literally on the edge of my seat.’?By The Letter Book Reviews?

‘The story is beautifully descriptive…one of those truly unforgettable stories which you just want to tell everyone to read for themselves.’?Jaffa Reads Too

‘I was desperate to find out what was going to happen next, terrified of what was to come. A psychological thriller with many twists and turns…a definite page turner that once started was very difficult to put down.’?Cal’s Blog