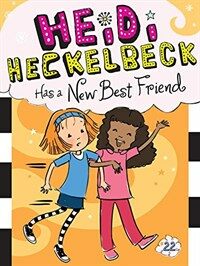 Heidi has a new best friend in the twenty-second Heidi Heckelbeck adventure!

A new family moves in next door and Heidi is excited to meet them. They have a daughter Heidi&;s age! Her name is Bryce Beltran, and she&;s Heidi&;s super nice, super talkative new neighbor. After spending the day together, Heidi promises to introduce her to Lucy and Bruce. But on the first day of school, things don&;t go as planned. Bryce is convinced that her so-called best friends aren&;t very good ones and tries to get in between them. Can Heidi help everyone get along before she loses them all?

With easy-to-read language and illustrations on almost every page, the Heidi Heckelbeck chapter books are perfect for beginning readers.

When Heidi introduces her new next-door neighbor, Bryce Beltran, to best friends Lucy and Bruce, things don't go quite as planned when they clash with the newcomer in ways that make Heidi worry about how to help everyone get along. Simultaneous and eBook.

When Bryce moves in next door to and wants to become her best friend, Heidi tries to keep all her friends from getting jealous.