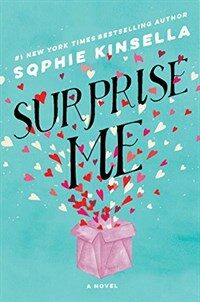 NEW YORK TIMES BESTSELLER • A witty and emotionally charged novel that delves into the heart of a marriage, and how those we love and think we know best can sometimes surprise us the most

“A delightful take on the mixed blessings of marital longevity.”—People

After ten years together, Sylvie and Dan have a comfortable home, fulfilling jobs, and beautiful twin girls, and they communicate so seamlessly they finish each other’s sentences. They have a happy marriage and believe they know everything there is to know about each other. Until it’s casually mentioned to them that they could be together for another sixty-eight years . . . and panic sets in.

They decide to bring surprises into their marriage to keep it fresh and fun. But in their pursuit of Project Surprise Me—from unexpected gifts to restaurant dates to sexy photo shoots—mishaps arise, with disastrous and comical results. Gradually, surprises turn to shocking truths. And when a scandal from the past is uncovered, they begin to wonder if they ever really knew each other at all.

With a colorful cast of eccentric characters, razor-sharp observations, and her signature wit and charm, Sophie Kinsella presents a humorous yet moving portrait of a marriage—its intricacies, comforts, and complications. Surprise Me reveals that hidden layers in a close relationship are often yet to be discovered.

Praise for Surprise Me

“In her signature fashion, Sophie Kinsella brings a cast of quirky, funny characters to this new work. [She] keeps the laughs coming. . . . Readers will follow the story with bated breath as the couple struggle to make their marriage right after everything they thought they knew about each other proves wrong.”—Library Journal

“Heartfelt . . . What at first seems like a light novel about familiar woes turns into a deeper story about trust, family, and perception.”—Publishers Weekly

“Winsome and zesty, Kinsella’s latest delivers all the hallmarks her many fans have come to expect.”—Booklist

“Pure fun . . . a hilariously moving look at marriage and the power of mixing things up.”—Kirkus Reviews

When the fragile contentment in their marriage is shattered by someone's casual remark about how many more years they will be together, Sylvie and Dan agree to arrange surprises for each other to revitalize their relationship, only to encounter a comical series of mishaps. By the best-selling author of the Shopaholic series.

"After being together for ten years, Sylvie and Dan have all the trimmings of a happy life and marriage; they have a comfortable home, fulfilling jobs, beautiful twin girls, and communicate so seamlessly, they finish each other's sentences. However, a trip to the doctor projects they will live another 68 years together and panic sets in. They never expected "until death do us part" to mean seven decades. In the name of marriage survival, they quickly concoct a plan to keep their relationship fresh and exciting: they will create little surprises for each other so that their (extended) years together will never become boring. But in their pursuit to execute Project Surprise Me, mishaps arise and secrets are uncovered that start to threaten the very foundation of their unshakable bond. When a scandal from the past is revealed that question some important untold truths, they begin to wonder if they ever really knew each other after all. With a colorful, eccentric cast of characters, razor-sharp observations,and her signature wit and charm, Sophie Kinsella crafts a humorous, yet thoughtful portrait of a marriage and shines a light on the danger of not looking past the many layers of the ones you love to discover how infinitely fascinating--and surprising--they truly are"--

When they learn they will live another sixty-eight years together, Sylvie and Dan plan to create little surprises for each other to keep their relationship fresh, but a scandal from the past reveals how little they truly know about one another.