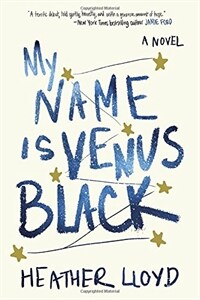 My Name Is Venus Black (Hardcover)

In this riveting, heartfelt debut, a young woman assumes a new name to escape her dark past and find the redemption she desperately seeks.

“It’s impossible not to root for this strong, willful girl as she finds her place in the world and for her brother as he tries to make sense of it.”—Kirkus Reviews

“Charming, touching, and a host of other adjectives not often associated with a murderous thirteen-year-old.”—Booklist

Venus Black is a straitlaced A student fascinated by the study of astronomy—until the night she commits a shocking crime that tears her family apart and ignites a media firestorm. Venus refuses to talk about what happened or why, except to blame her mother. Adding to the mystery, Venus’s developmentally challenged younger brother, Leo, goes missing.

More than five years later, Venus is released from prison with a suitcase of used clothes, a fake identity, and a determination to escape her painful past. Estranged from her mother, and with her beloved brother still missing, she sets out to make a fresh start in Seattle, skittish and alone. But as new people enter her orbit—including a romantic interest and a young girl who seems like a mirror image of her former lost self—old wounds resurface, and Venus realizes that she can’t find a future while she’s running from her past.

In this gripping story, debut novelist Heather Lloyd brilliantly captures ordinary lives thrust into extraordinary circumstances. Told through a constellation of captivating voices, My Name Is Venus Black explores the fluidity of right and wrong, the pain of betrayal, and the meaning of love and family.

Praise for My Name Is Venus Black

“Fans of realistic coming-of-age fiction will enjoy Lloyd’s fast-paced first novel for the freshly drawn original characters, compelling story line, and beautiful tribute to the healing power of love. It’s bound to have crossover appeal to older YA readers.”—Library Journal

“A dark but ultimately uplifting story about family, love, and forgiveness, and how to find your place in the world, My Name Is Venus Black is a powerful debut novel from a fresh voice in fiction.”—New York Times bestselling author Sarah Jio

Five years after committing a shocking crime that she refuses to talk about, once-passionate astronomy student Venus Black emerges from prison and changes her identity, only to discover in the face of a romantic interest, a girl like herself and a sibling's disappearance that she cannot keep running from the past. A first novel.

"A stirring debut novel about a young woman searching for her kidnapped brother after she commits a terrible crime but longs for redemption. Thirteen-year-old Venus Black, a straitlaced, straight-A student is the last person anyone would expect to get in trouble, but when she is arrested for committing a shocking crime, it is clear that there was more going on in Venus's world than anyone knew. When she is released from a juvenile detention center five years later, she assumes a new identity in the hopeof escaping the pain of her past, the mother that disappointed her, and her criminal reputation. Most importantly, she pledges to find her beloved, mentally disabled younger brother, Leo, who was kidnapped while she was gone. A newcomer to fiction, Heather Lloyd crafts a constellation of captivating, fresh voices in this redemptive novel that forces us to question our definitions of right and wrong, the difficulties in starting over, and whether or not it's possible to forgive the family we're born with--and live with the family we choose to be our own"--

Five years after committing a shocking crime that she refuses to talk about, once-passionate astronomy student Venus Black emerges from prison and changes her identity only to discover that she cannot keep running from the past.