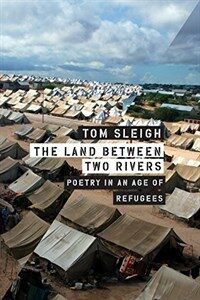 The Land Between Two Rivers: Writing in an Age of Refugees (Paperback)

Tom Sleigh describes himself donning a flak jacket and helmet, working as a journalist inside militarized war zones and refugee camps, as “a sort of Rambo Jr.” With self-deprecation and empathetic humor, these essays recount his experiences during several tours in Africa and in the Middle Eastern region once called Mesopotamia, “the land between two rivers.”

Sleigh asks three central questions: What did I see? How could I write about it? Why did I write about it? The first essays in The Land between Two Rivers focus on the lives of refugees in Syria, Lebanon, Jordan, Kenya, Somalia, and Iraq. Under the conditions of military occupation, famine, and war, their stories can be harrowing, even desperate, but they’re also laced with wily humor and an undeluded hopefulness, their lives having little to do with their depictions in mass media. The second part of the book explores how writing might be capable of honoring the texture of these individuals’ experiences while remaining faithful to political emotions, rather than political convictions. Sleigh examines the works of Anna Akhmatova, Mahmoud Darwish, Ashur Etwebi, David Jones, Tomas Transtromer, and others as guiding spirits. The final essays meditate on youth, restlessness, illness, and Sleigh’s motivations for writing his own experiences in order to move out into the world, concluding with a beautiful remembrance of Sleigh's friendship with Seamus Heaney.