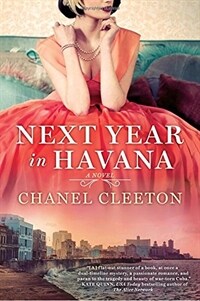 Next Year in Havana (Paperback)

“A beautiful novel that's full of forbidden passions, family secrets and a lot of courage and sacrifice.”—Reese Witherspoon

After the death of her beloved grandmother, a Cuban-American woman travels to Havana, where she discovers the roots of her identity—and unearths a family secret hidden since the revolution...

Havana, 1958. The daughter of a sugar baron, nineteen-year-old Elisa Perez is part of Cuba's high society, where she is largely sheltered from the country's growing political unrest—until she embarks on a clandestine affair with a passionate revolutionary...

Miami, 2017. Freelance writer Marisol Ferrera grew up hearing romantic stories of Cuba from her late grandmother Elisa, who was forced to flee with her family during the revolution. Elisa's last wish was for Marisol to scatter her ashes in the country of her birth.

Arriving in Havana, Marisol comes face-to-face with the contrast of Cuba's tropical, timeless beauty and its perilous political climate. When more family history comes to light and Marisol finds herself attracted to a man with secrets of his own, she'll need the lessons of her grandmother's past to help her understand the true meaning of courage.

Readers Guide for Next Year in Havana

1. The novel alternates between Elisa Perez’s life in Cuba in 1958 and 1959 and her granddaughter Marisol Ferrera’s trip to Cuba in 2017. Which woman did you identify with more? What parallels can you see between their personalities and their lives? What differences?

2. The first chapter ends with Elisa wondering how long her family will be away from Cuba. The final chapter ends over a decade later with her posing the same question. How are the themes of hope and exile illustrated in the book? How does the weight of exile affect the Perez family?

3. When Marisol arrives in Cuba she struggles with identifying as Cuban because she grew up in the United States and because she has never set foot on Cuban soil. How much does a physical place define one’s identity? How does Marisol’s trip alter her views about being Cuban and change her perception of herself? How do Marisol and her family attempt to keep their heritage alive in exile? Are there stories and rituals handed down through the generations in your family?

4. Like her grandmother, Marisol falls in love with a man who has revolutionary political leanings. What similarities can you see between Pablo's and Luis’s dreams for Cuba? What differences are there in their worldview? How do they go about achieving their dreams for a better Cuba?

5. Sacrifice is a major theme that runs throughout the novel. How do the characters make sacrifices for one another, and what are some examples of them risking their safety and security for their loved ones? How do you think you would have acted in similar situations?

6. Family plays an important role in the novel, and each of the characters face their own struggles in their attempts to live up to their family’s expectations. What are some examples of this? Did you identify with one character’s point of view more? Are there certain expectations in your own family? Do you feel the need to live up to them? How have they shaped your life decisions?

7. Elisa’s final wish is to have her ashes scattered over Cuban soil. Do you agree with her decision? Would you have wanted your ashes spread in Cuba or would you have preferred to be buried on American soil? Do you think Marisol picked the best place to spread Elisa’s ashes? Where else would you have considered scattering them? Have you scattered the ashes of a loved one? What was the experience like?

8. What initially attracts Elisa to Pablo? Do you believe they would have been able to overcome the differences between them if they weren’t caught in the midst of the Cuban Revolution? Or was their love fueled by the urgency of the times?

9. Elisa chooses to save her letters from Pablo and her memories of their romance by burying them in a box in the backyard. If you had a box in which to bury your most precious possessions, what would you choose to keep safe?

10. What parallels do you see between life in modern Cuba and life in pre-revolutionary Cuba? What differences?

11. Pablo tells Elisa that everything is political. Do you agree with him?

12. Despite coming from very different backgrounds, Marisol and Luis share many similarities that bring them together as a couple. What are some examples of this? Why do you think they get along so well? Do you think they are a good influence on each other?

13. Pablo believes that the best way to change his country is from within. Others like Elisa’s family choose to leave Cuba because they can no longer support the regime. Which approach do you identify with? What are the differences between the Cubans who remained in Cuba and those who live in exile? What are the similarities?