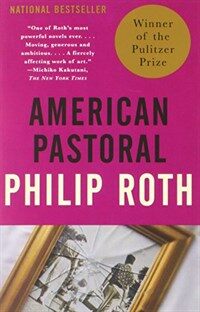 Winner of the Pulitzer Prize

Here is Philip Roth's masterpiece—an elegy for the American century's promises of prosperity, civic order, and domestic bliss. Roth's protagonist is Swede Levov, a legendary athlete at his Newark high school, who grows up in the booming postwar years to marry a former Miss New Jersey, inherit his father's glove factory, and move into a stone house in the idyllic hamlet of Old Rimrock. And then one day in 1968, Swede's beautiful American luck deserts him.

For Swede's adored daughter, Merry, has grown from a loving, quick-witted girl into a sullen, fanatical teenager—a teenager capable of an outlandishly savage act of political terrorism. And overnight Swede is wrenched out of the longed-for American pastoral and into the indigenous American berserk. Compulsively readable, propelled by sorrow, rage, and a deep compassion for its characters, American Pastoral gives us Philip Roth at the height of his powers.

The rise and fall of the American Dream provide the backdrop for the story of Swede Levov, a prosperous New Jersey man and grandson of immigrants, whose fanatical daughter bombs a post office in 1968. Reprint. 100,000 first printing.

A former athletic star, devoted family man, and owner of a thriving glove factory, Seymour "Swede" Levov finds his life coming apart during the social disorder of the 1960s, when his beloved daughter turns revolutionary terrorist out to destroy her father's world