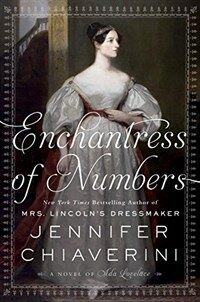 Enchantress of Numbers: A Novel of ADA Lovelace (Hardcover)

The only legitimate child of Lord Byron, the most brilliant, revered, and scandalous of the Romantic poets, Ada was destined for fame long before her birth. But her mathematician mother, estranged from Ada's infamous and destructively passionate father, is determined to save her only child from her perilous Byron heritage. Banishing fairy tales and make-believe from the nursery, Ada’s mother provides her daughter with a rigorous education grounded in mathematics and science. Any troubling spark of imagination—or worse yet, passion or poetry—is promptly extinguished. Or so her mother believes.

When Ada is introduced into London society as a highly eligible young heiress, she at last discovers the intellectual and social circles she has craved all her life. Little does she realize how her exciting new friendship with Charles Babbage—the brilliant, charming, and occasionally curmudgeonly inventor of an extraordinary machine, the Difference Engine—will define her destiny.

Enchantress of Numbers unveils the passions, dreams, and insatiable thirst for knowledge of a largely unheralded pioneer in computing—a young woman who stepped out of her father’s shadow to achieve her own laurels and champion the new technology that would shape the future.

1.       How do you think the loneliness and isolation of Ada’s childhood and her mother’s jealousy of the nurses Ada loves affect her as she grows into adolescence?
2.       What is it about flight that captivates Ada’s imagination? The scientific aspects of Flyology fascinate her, of course, but what else could Ada’s desire to create wings for herself represent?
3.       How does her status as the daughter of the renowned poet Lord Byron shape Ada’s life? What is it like growing up in the shadow of his brilliance and infamy? What similarities and differences do you see between Ada’s experiences and those of the children of celebrities today?
4.       Why do you think Ada’s mother was so fearful of Ada’s imagination and “the influence of [her] bad Byron blood?” Why does she forbid her daughter to indulge in fairy tales, poetry, and make-believe play, even though she herself writes poetry?
5.       The first time Ada visits Babbage’s home, she is introduced to his dancing automaton, which arrests her attention. She draws closer to it, “longing to trace the lines of the dancer’s face with my fingertip. Even her eyes seemed alive, full of mischief and imagination.” Why was she so fascinated by the Silver Lady?
6.       After an argument with her mother, Ada muses, “I realized that the only way I could escape her control any sooner would be to marry.” What are Ada’s expectations for marriage? Are they fulfilled? Does she enjoy more independence or less as a married woman, or are her circumstances essentially unchanged?
7.       Ada mentions that Mrs. Somerville, though very accomplished in science and mathematics, was barred from the Royal Society because she was a woman. How is Ada affected by this? Does she feel the loss of this exclusion? Why or why not?
8.       Why do you think Ada was so enthralled by Babbage’s inventions, both the Difference Engine and the Analytical Engine? How does Ada’s poetic and imaginative mind help her understand their potential even more so than Babbage himself?
9.       At various periods throughout her life, friends and family worry that Ada is dangerously obsessed with mathematics and science, often describing her pursuit of knowledge as a “mania.” Ada fiercely rejects this label. Do you agree with Ada, or do you think her friends and family had some cause for concern? Why or why not?
10.   Compare and contrast Ada and Lord King’s courtship to her mother and Lord Byron’s and their early years of marriage.
11.   Ada’s love for her mother wavers between reverence and resentment. How does this affect Ada’s own childrearing?
12.   All her life, Ada has been told that her foremost duty is to marry and produce an heir. Why is this not enough for her? Why is she driven to create a “Great Work” of mathematics or science as her legacy?