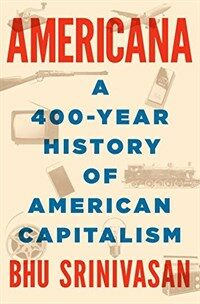 An absorbing and original narrative history of American capitalism

NAMED A BEST BOOK OF 2017 BY THE ECONOMIST

From the days of the Mayflower and the Virginia Company, America has been a place for people to dream, invent, build, tinker, and bet the farm in pursuit of a better life. Americana takes us on a four-hundred-year journey of this spirit of innovation and ambition through a series of Next Big Things -- the inventions, techniques, and industries that drove American history forward: from the telegraph, the railroad, guns, radio, and banking to flight, suburbia, and sneakers, culminating with the Internet and mobile technology at the turn of the twenty-first century. The result is a thrilling alternative history of modern America that reframes events, trends, and people we thought we knew through the prism of the value that, for better or for worse, this nation holds dearest: capitalism.&#160;

In a winning, accessible style, Bhu Srinivasan boldly takes on four centuries of American enterprise, revealing the unexpected connections that link them. We learn how Andrew Carnegie's early job as a telegraph messenger boy paved the way for his leadership of the steel empire that would make him one of the nation's richest men; how the gunmaker Remington reinvented itself in the postwar years to sell typewriters; how the inner workings of the Mafia mirrored the trend of consolidation and regulation in more traditional business; and how a 1950s infrastructure bill triggered a series of events that produced one of America's most enduring brands: KFC. Reliving the heady early days of Silicon Valley, we are reminded that the start-up is an idea as old as America itself.

Entertaining, eye-opening, and sweeping in its reach, Americana is an exhilarating new work of narrative history.

A narrative history of American capitalism profiles the inventions, techniques and industries that drove the nation forward, from the telegraph and railroads through guns, banking, flight, suburbia and sneakers.

A narrative history of American capitalism profiles the inventions, techniques, and industries that drove the nation forward, from the telegraph and railroads through guns, banking, flight, suburbia, and sneakers.