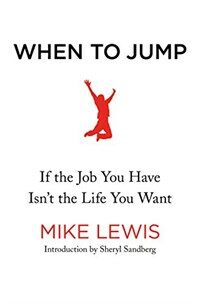 When to Jump: If the Job You Have Isn't the Life You Want (Hardcover)

How do you start doing what you really, really want? You jump. With inspiration and instruction from more than forty true stories of people who have already jumped and have never looked back.

An inspirational book that lays out the “Jump Curve”―those fundamental four steps to finally, wholeheartedly, pursuing your dreams―using a wide variety of experiences from people who have jumped. With a foreword from Sheryl Sandberg and including the wisdom of Michael Lewis and Brandon Stanton, among many others.

When Mike Lewis was twenty-four and working in a prestigious corporate job, he anxiously wanted to leave and pursue his dream of becoming a professional squash player. But he had questions: When is the right time to make the move from work that is comfortable to a career of doing what we truly want? How have people planned to make this jump? What did they feel around making the jump and how did they deal with those emotions?

He sought out guidance from other people who had “jumped,” and the answers he got―from a banker who became a brewer, a journalist who pursued his dream of becoming a paramedic, a garbage collector who became a furniture designer, et cetera―were so clear-eyed and inspiring that Mike wanted to share what he had heard and learned with anyone else who might be helped by these stories. First, though, he became a professional squash player.

The right book at the right time, When to Jump is a culmination of true, heartening, and instructive stories with a straightforward four-step guide and section takeaways that will reassure: You can make the jump. Just let yourself.